According to Forbes, the 33-year-old has pocketed over $1,000,000,000 in pre-tax earnings during his career – following in the footsteps of Cristiano Ronaldo.

And they have stated the Argentine international is the highest-paid footballer of 2020.

Messi is said to be set to pocket £98million in total this year from his salary and endorsements.

As well as being sponsored by the likes of Adidas and Pepsi, the six-time Ballon d’Or winner has just released a limited edition Budweiser beer.

Juventus striker Ronaldo is second on the Forbes list, as they state he stands to earn £91m this year. 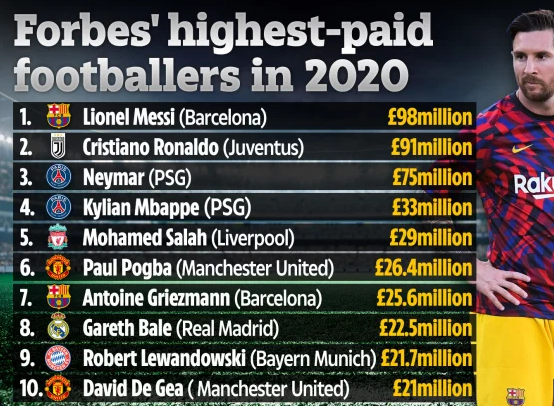 Unsurprisingly, Brazilian trickster Neymar – who could be handed a seven-game ban for punching Marseille defender Alvaro – is in third place.

The Paris Saint-Germain winger, who quit Nike to join Puma, is in line to pocket £75m, with his Les Parisiens team-mate Kylian Mbappe fourth with £33m.

Liverpool ace Mohamed Salah (£29m) is fifth thanks to his endorsements from Adidas and Vodafone Egypt.